In the annals of history, there are many spiritual masters who can guide us in the Christian life, and we need the guidance! After all, being a Christian is not easy! We must remember, however, that there have been countless travelers before us, some who have followed similar paths, and others who have followed vastly different paths, but all with experiences that can benefit our spiritual growth.

We are not on this journey alone.

Keeping this in mind, I have decided to start a new series called called “Companions On the Journey.” Praise God, we have many saints to look to for guidance in the Christian life, so from time to time, I will pick a new saint to read and follow as I seek to grow in Christ in my own life. From these readings, I hope to develop reflections for posting here on the blog. It may work, or it may not, but let’s try it out and see how we do. Expect these particular posts to come out once or twice a week. They may deal solely with the text, make connections with other authors I have recently read, or even external happenings around here and back home. The nice thing about the nature of this sort of project is that I can work on it at my own pace and then post-date the entries for later publishing, which should make things a bit easier. 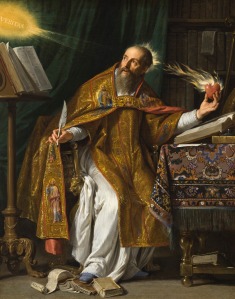 Which brings me to Saint Augustine, our first companion in the journey. As a convert myself, I have always felt a deep connection to his writing, especially his Confessions, so this is where we will start. I will personally be going through the entire Confessions, but I may choose to omit certain reflections from the blog for various and sundry reasons. For these reflections, I will be utilizing R. S. Pine-Coffins’s translation of the Confessions, available in the Penguin Classics series (ISBN 978-0-14-044114-7). If you would like to pick up a copy yourself, I suggest calling Easter’s Books and Gifts (full disclosure: one of their former employees is my Godmother). As far as how long it will take to get through Augustine’s Confessions I am not sure, but I figure we will be journeying with him for a while. Even though I will be reading the entire book, that doesn’t mean that everything in the book will be reflected upon on the blog (we would be here for a very long time). To that end, I will note at the end of each reflection which chapter(s) the next post will focus upon.

If you have any questions or suggestions, feel free to leave a comment, get in touch via Facebook, or fill out the contact form in the “About” section. The first post based on St. Augustine’s Confessions will go live on Saturday morning, beginning with Book I, Chapter 1.

This is part of a continuing series, Companions on the Journey, which travels along with a particular companion in the spiritual life, one of the great saints, in order discover how some of their writings might be applicable to our everyday lives. Currently, we are traveling with Augustine of Hippo through his work, Confessions. You can take a look at previous posts in the series or read the introduction.

For this is the will of my Father, that everyone who sees the Son and believes in him may have eternal life, and I shall raise him on the last day. – John 6.40

Today in the Abbey Church, we celebrated the Mass for All Souls Day, calling to mind all of those who have passed before us. In those moments, there was a tinge of sorrow, yes; perhaps it was a longing to once again be with loved ones. Then again, there was also a joy, a joy that recognizes the loving mercy of the Father who draws His children to His bosom.

It was following Mass, however, during the procession to the monastery graveyard, that the reality of death became more pronounced. As we walked in silence, I was acutely aware of the biting chill that enveloped us. The reds, golds, and browns of the changing leaves gently swayed on their respective branches, ready to fall to the earth. Autumn had certainly descended, preparing the way for the coming of winter, reminding all gathered of the fleeting nature of our lives. Here at the changing of the seasons, the Church in her wisdom has us call to mind the reality of death, the need to pray for each other, and the Paschal Mystery that frees us from that same death.

Entering the graveyard, I was struck like never before by the row upon row of gravestones, monks who had dedicated their lives in faithful service to the Lord. These monks, who crossed an ocean and a vast country to settle in the Northwest had directly affected thousands of lives, and through their work in forming priests, indirectly impacted hundreds of thousands. Filled with gratitude for their witness, I recognized how “they saw the Son and believed in Him.” As we sang the antiphon “In Paradisum”, I was struck at how much God can work in our lives, if we let Him. If we allow His grace to prevail, we will have eternal life. If we follow His example of humility and obedience, death will have no power. Death has yielded to the King who humbled Himself:

Death has become like a tyrant who has been completely conquered by the legitimate monarch; bound hand and foot the passers-by sneer at him, hitting him and abusing him, no longer afraid of his cruelty and rage, because of the king who has conquered him. So has death been conquered. -St. Athanasius

And so as we proceed into the month of November, remembering those who came before, let us give thanks for their influence on our lives and the work that God performed through them. At the same time, let us remember to pray for all those who have departed us, that perpetual light may shine upon them. In a particular way, I am remembering the following individuals (listed by last name), and others whom I am probably forgetting, throughout this month:

(If you would like to add anyone, or remind me of someone I should have listed, please let me know either here or via Facebook.)

While the turn of the season and liturgical calendar brings to mind our own mortality, something we should keep in the forefront of our thoughts more often, we need not despair, knowing that through Him, death has lost its sting. Soon, we will enter the period of waiting, looking to His arrival as a small child in a manger, who will go to Calvary in the ultimate expression of love.

I leave you with words that have aways brought to mind, at least for me, thoughts of eternity and a blessed hope:

And the ship went out into the High Sea and passed into the West, until at last on a night of rain Frodo smelled a sweet fragrance on the air and heard the sound of singing that came over the water. And then it seemed to him that as in his dream in the house of Bombadil, the grey rain-curtain turned all to silver glass and was rolled back, and he beheld white shores and beyond them a far green country under a swift sunrise. -J.R.R. Tolkien