Tonight, Friday February 10th, promises to give us quite a show in terms of astronomical phenomena. While it may mean a late night for observers, hopefully you’ll be able to sleep in a bit on Saturday morning. A rundown of tonight’s show in the night sky:

Full moon: Tonight you will see the full “snow” moon, which is a fairly accurate name, considering the time of year. 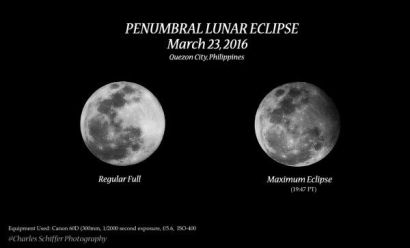 An example of what you will see – from EarthSky Twitter Feed

Penumbral lunar eclipse: If you’re in the right spot at the right time, you may see that something seems a bit “off” about the moon tonight, and you’d be right: for a period of about four hours, the full moon will be just slightly passing through Earth’s shadow. The greatest eclipse will occur at 7:44 EST or 4:44 PST. That means for those of us on the West Coast, such as yours truly, it may be difficult to notice any change at all, both due to the amount of light in the sky and the fact that we are near the edge of the eclipse itself.

Comet 45P: In the early hours of morning, just prior to  dawn, you will see Comet 45P/ Honda-Mrkos-Pajdusakova (say that three times fast) streaking through the constellation Hercules. Better take a pair of binoculars for this one – at magnitude +6.5, it will be difficult to see with the naked eye unless you are in an extremely rural area. Start with the handle of the Big Dipper and continue over to the constellation Bootes and green hue of the comet should be visible. Recent evidence suggests, however, that it no longer has a tail, due to a likely close approach to the sun, burning off much of the comet’s ice.

So make some hot chocolate, bundle up, and enjoy a night of looking up at the heavens! Then sleep in tomorrow morning.

H/T to Smithsonian Mag, EarthSky, and Sky and Telescope